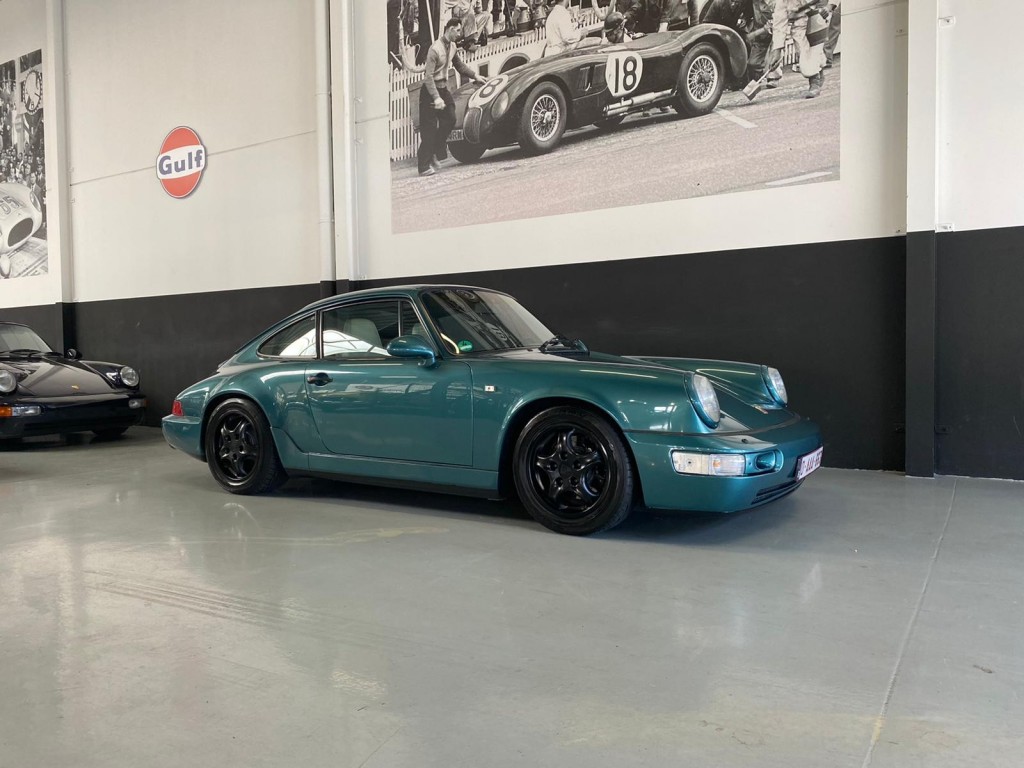 Legendary Classics has just received this stunning 1990 Porsche 911/964 Carrera 4 in the extremely rare Libel Turquoise Metallic. This exceptional 911 is in great condition overall. Technically & optically a winner. The crÃ¨me interior, which is in a very nice condition, is nicely offset against the Libel Turquoise Metallic. The car comes with service history and the Porsche book and records. The odometer shows 139.400 kilometers.

Originally the car was delivered in Germany where it was driven most of its live. Only recently the car came to the Netherlands but has not yet been re-registered by the former owner who is an avid Porsche collector. Due to changes in his current situation he has decided to resell the car and use his other Porsche 964âs.
This 911 Carrera 4 has a Friedrich Motorsport cup exhaust with TUV certification for a sportier deep sound. This really brings out the character of this beautiful Porsche.

Very recently our 964 has gotten brand new brake discs and pads. The suspension was upgraded to Bilstein which for the Porsche connoisseurs is a major upgrade which amounts to a cost of â¬ 5.000 for a decent setup.
The body of the car is very nice. No rust issues or indications of accident damage in the front or rear of the body. The mechanicals of the car are very strong, and the car does not show signs of oil leakage or fluid losses.
The Porsche 964 is the company's internal name for the Porsche 911 manufactured and sold between 1989 and 1994. The 964 is Porsche's internal code name for the 911 Carrera 2 and 911 Carrera 4 models, which were badged simply as Carrera 2 and Carrera 4. The term 964 is often used by automotive publications and Porsche enthusiasts to distinguish them from other generations of the Carrera.

The 964 series were designed by Benjamin Dimson through January 1986, it featured significant styling revisions over previous 911 models, most prominently the more integrated bumpers. It was also the first car to be offered with Porsche's Tiptronic automatic transmission and all-wheel drive as options.
The 964 was considered to be 85% new as compared to its predecessor, the Carrera 3.2. The first 964s available in 1989 were all wheel drive equipped "Carrera 4" models; Porsche added the rear wheel drive Carrera 2 variant to the range in 1990. Both variants were available as a coupÃ©, Targa or Cabriolet. The 964 Carrera was the last generation sold with the traditional removable Targa roof.
A new naturally aspirated engine called the M64 was used for 964 models, with a flat-6 displacement of 3.6 litres. Porsche substantially revised the suspension, replacing torsion bars with coil springs and shock absorbers. Other improvements that were added to the 964 model were power steering and ABS brakes; both were standard equipment for the 964.

The exterior bumpers and fog lamps became flush with the car for improved aerodynamics. A new electric rear spoiler raised at speeds above 50 mph (80 km/h) and lowered down flush with the rear engine lid at lower speeds. A revised interior featured standard dual airbags beginning in late 1989 for all North American production 1990 MY cars. A new automatic climate control system provided improved heating and cooling. Revised instrumentation housed a large set of warning lights that were tied into the car's central warning system, alerting the driver to a possible problem or malfunction.
The suspension was redesigned using coil springs instead of torsion bars, the first major engineering changes since the original 911. The front suspension used MacPherson struts, a system that has continued for all subsequent versions, but the rear suspension retained semi-trailing arms.

This 1990 Porsche can be seen by appointment in our showroom in Etten-Leur, the Netherlands.
In the current COVID-19 situation, we can with precautions that were taken, receive visitors in our showroom.
Call 0031623679846 for more information.
We ship to any location in the world. Ask our partner FreightHammer for a free shipping quote! (http://www.freighthammer.com/)

LOOKING FOR THIS PORSCHE 964 ?