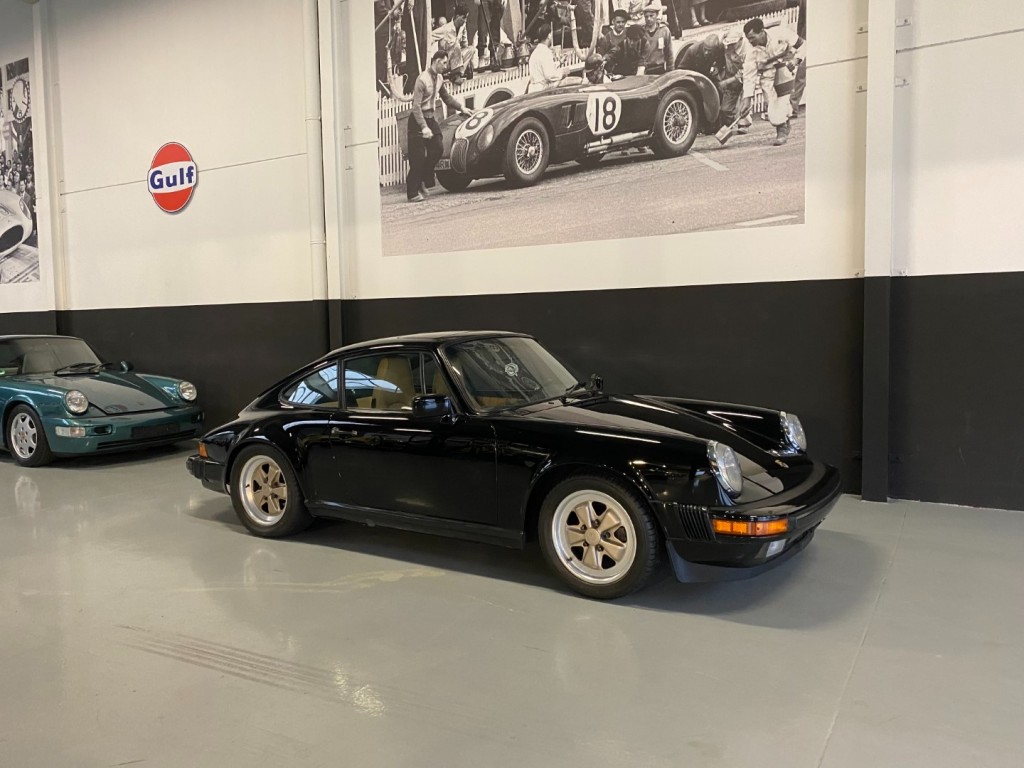 Legendary Classics has just received this extremely cool 1985 Porsche 3.2 Carrera Coupe
This Porsche is a nice example of the Porsche G Model 911 champagne creme interior.
The car comes with service history and the Porsche book and records. All the service entries were stamped by Sunnyvale Porsche up to 2001. This 911 was delivered new by Sunnyvale Porsche (Anderson-Behel Porsche) on the 29th of May 1985 to M. Nguyen.
The Porsche 911 (pronounced Nine Eleven or in German: Neunelfer) is a two-door, 2+2 high performance rear-engined sports car. Introduced in September 1964 by Porsche AG of Stuttgart, Germany. It has a rear-mounted flat-six engine and all-round independent suspension. It has undergone continuous development, though the basic concept has remained unchanged. The engines were air-cooled until the introduction of the Type 996 in 1998, with the 993, produced from 1994â1998 model years, being the last of the air-cooled Porsche sports cars.
The Carrera 3.2 Model was introduced in 1984 and replaced the 3.0 SC series that was produced between 1978 to 1983, reviving the Carrera name for the first time since 1977. This was the last iteration in the original 911 series, with all subsequent models featuring new body styling and new brake, electronic, and suspension technologies.
The new higher-displacement engine, a 3.2-litre horizontally opposed flat 6-cylinder unit, was utilized. At the time Porsche claimed it was 80% new. The new swept volume of 3,164 cc was achieved using the 95 mm (3.7 in) bore (from the previous SC model) combined with the 1978 Turbo 3.3 crankshaft's 74.4 mm (2.9 in) stroke. In addition, higher domed pistons increased the compression ratio from 9.8 to 10.3:1 (9.5:1 for the US market). New inlet manifold and exhaust systems were fitted. The 915 transmission was carried over from the SC series for the first three model years. In 1987, the Carrera got a new five-speed gearbox sourced from Getrag, model number G50 with proven BorgWarner synchronizers. This slightly heavier version also featured a hydraulically operated clutch.
With the new engine, power was increased to 207 hp (154 kW; 210 PS) (at 5,900 rpm) for North American-delivered cars and to 237 PS (174 kW; 234 hp) (at 5,900 rpm) for most other markets. This version of the 911 accelerated 0â97 km/h (0â60 mph) in 5.4 seconds and had a top speed of 240 km/h (150 mph) as measured by Autocar. Factory figures were more modest: 0â60 mph time of 6.3 seconds for the US version and 6.1 seconds for cars outside the American market.
The brake discs were increased in size to aid in more effective heat dissipation and improved oil-fed chain tensioners were fitted to the engine. To improve oil cooling, a finned cooler replaced the serpentine lines in the front passenger fender well. This was further improved in 1987, with the addition of a thermostatically controlled fan.
Driving refinement and motor reliability were improved with an upgrade of the fuel and ignition control components to an L-Jetronic with Bosch Motronics 2 DME (Digital Motor Electronics system). An improvement in fuel-efficiency was due to the DME providing a petrol cut-off on the overrun. Changes in the fuel map and chip programming from October 1986 further improved the power to 217 hp (162 kW; 220 PS) (at 5,900 rpm) for North American delivered cars as well as for other markets mandating low emissions, like Germany.
Three basic models were available â coupÃ©, Targa and cabriolet. The Carrera is almost indistinguishable from the SC with the external clue being the front fog lights that were integrated into the front valance. Only cosmetic changes were made during the production of the Carrera, with a redesigned dashboard featuring larger air conditioning vents appearing in 1986.
In 1984, Porsche also introduced the M491 option. Officially called the Supersport in the UK, it was commonly known as the "Turbo-look"] It was a style that resembled the 930 Turbo with wide wheel arches and the distinctive "tea tray" tail. It featured the stiffer suspension shared with the turbo and the superior turbo braking system as well as the wider turbo wheels. Sales of the Supersport were high for its first two years in the United States because the desirable 930 was not available.
Total production of the 911 3.2 Carrera series was 76,473 cars (35,670 coupÃ©, 19,987 cabrio, 18,468 Targa).
In the current COVID-19 situation, we can with precautions that were taken, receive visitors in our showroom.
Call 0031623679846 for more information.
We ship to any location in the world. Ask our partner FreightHammer for a free shipping quote! (http://www.freighthammer.com/)

LOOKING FOR THIS PORSCHE 911 ?